Θ  Preview YouTube video The Empire’s War on the Border 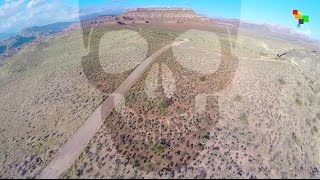 About ten years ago, Homeland Security began creating a vast graveyard in a stretch of the Arizona desert’s most remote and rugged terrain. It did so by focusing so intensely on traditional migrant routes that people crossing from Mexico were forced further and further east. They had to cross where the routes were the roughest, where there are no water resources, no population centers to speak of, and where there are miles and miles to go before there is a ray of hope on the horizon.

Now, at least 7,000 human skeletons lie buried beneath those desert miles. And the U.S, government planned it that way.

Crandaddy81
What kind of lowlife scum does it take to so gleefully destroy and poison lifesaving water resources for desperate people traversing a desert?

It takes a pool of Border Patrol applicants from small towns across the Southwest, in regions with skyrocketing unemployment, failed schools, loss of small farmers, a devastating methamphetamine epidemic, and infant mortality rates higher than those of most developing nations.

8 thoughts on “We Call it Murder: The Empire’s War on the Border”